You might think the Met Gala is all about fashion, but the guest list is just as important as the dresses going up those famous steps. Where else do you see the biggest names in fashion, Hollywood, and culture converge and let their hair down? Throughout the years, the star-studded event has been the site of some unforgettable celebrity moments—from Katy Perry’s larger-than-life angel wings to Rihanna’s riveting performance on top of a dinner table. And who could forget when Taylor Swift and Tom Hiddleston were first caught dancing flirtatiously with each other, kindling the Hiddleswift phenomenon?

Here, we take a look back at the archives and share the craziest and most memorable moments in Met Gala history. END_OF_DOCUMENT_TOKEN_TO_BE_REPLACED

Delhi, March: Liva, the leading ingredient consumer brand of the AdityaBirla Group announces its partnership with Fashion Design Council of India’s (FDCI) to showcase India’s first Green Heart Fashion Show with a thought leading initiative to promote the concept of sustainability through their collection and products. This initiative by Aditya Birla was the reflection of their commitment towards breaking the myth about eco-friendly materials and also educates the users about the need for utilization of sustainable materials to avoid environmental hazards in future.

END_OF_DOCUMENT_TOKEN_TO_BE_REPLACED

A symbol of ‘forever’, the sari and its multiplicity, its candour and its personality will be celebrated by top designers from all corners of the country

New Delhi, March 8, 2019: The Lotus Makeup India Fashion Week Autumn Winter 2019, in association with Liva, at the JLN stadium from March 13-17, will witness a coalescence of heritage and modernity, on March 16, for the Grand Finale.

END_OF_DOCUMENT_TOKEN_TO_BE_REPLACED

Oscars 2019: Everything you need to know about Hollywood’s biggest night

From the venue and time to the nominations and where you can watch it in India, here’s a quick refresher on the Oscars, Hollywood’s most sought-after awards night
Your-definitive-guide-to-Oscars-2019

END_OF_DOCUMENT_TOKEN_TO_BE_REPLACED

This week, saris won several votes amongst Bollywood’s leading ladies. All set for the release of her next film Manikarnika, Kangana Ranaut met fans in a shimmering pastel Tarun Tahiliani sari that’s perfect for a grand cocktail party, while Malaika Arora went with a simpler sari in a striking shade of red by Misha Lakhani. Also favouring dark hues was Vidya Balan, who made an appearance in a deep brown and rani pink Raw Mango drape. If you love soothing pastel hues, however, Alia Bhatt was the actor you needed to check out this week.

Joined by beau Ranbir Kapoor and friends including Ranveer Singh, Karan Johar and Vicky Kaushal, Bhatt flew to Delhi this week for a very special meeting with PM Narendra Modi in an elegant Manish Malhotra kurta set that’s perfect for your next family puja. Another star who gave us major festive dressing inspiration this week was Sonam K Ahuja. Not one to blend in with her sartorial picks, the actor recently stepped out for a celebration in a Good Earth sharara set that was anything but basic. Kapoor Ahuja wore her satiny champagne-coloured sharara pants with a metallic choli, topping the combo off with a sheer kurta in a matching hue.

Among the Bollywood actors who opted for Western silhouettes, both Bhatt and Deepika Padukone went with a similar look this week. In case you missed it, neon is making quite the comeback this season, and both actors attended events recently wearing all-white outfits with shockingly bright footwear. While Bhatt launched the trailer of Gully Boy in an ivory Jonathan Simkhai number and orange sock booties, Padukone stepped out in a quirky white Kanika Goyal outfit, which she added a pop of colour to with acid coral pumps.

Overseas, the big moment of the week, of course, was 2018’s edition of the Golden Globes. Like every year, the annual awards ceremony had some of Hollywood’s favourite faces serving up some unforgettable red carpet looks. Amongst the most beautiful of the evening were Lady Gaga’s periwinkle Valentino, which matched perfectly with her new hair colour), Lupita Nyong’o’s beaded royal blue Calvin Klein gown, Saoirse Ronan’s slinky silver Gucci maxi. Catch up on all our favourite looks from the week below

END_OF_DOCUMENT_TOKEN_TO_BE_REPLACED

Need party dressing inspiration? These celebrities will have you covered

With a little help from the fashion folk, here’s your party style pinned down in four tribes. Whose team are you on? We may have spent the first half of the year obsessing over every permutation of plastic but for the party months, satin, in all its sensuousness, is staging a comeback. There’s the buttery and bright version that cues memories of Kate Hudson in How To Lose A Guy In 10 Days (Naomi Campbell wore an almost-identical slip dress to the CFDAs after-party). Then there’s the Barbie pink, vintage Jean Paul Gaultier rendition spotted on Bella Hadid. And let’s not forget the modern update on the material as seen on Queen Bey in ‘Everything is Love’, where a glossy Peter Pilotto pantsuit was anointed the new night-out hero. 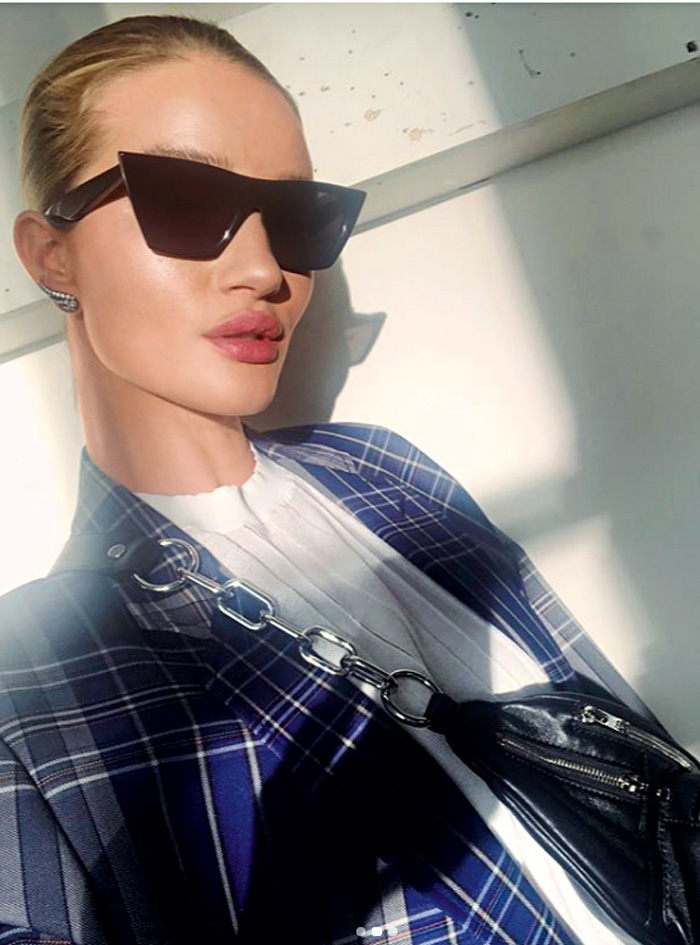 It’s safe to say the fanny pack has severed its tourist ties and officially made the transition from micro trend to mainstay. No longer belted to the waist but casually strapped across the chest, fashion insiders have been, quite literally, keeping it close to their heart. To make it after-hours-appropriate, trade in nylon for nappa, straps for chains (cue Rosie Huntington-Whiteley’s Alexander Wang number) and logos for embellishments—the It bag of the fanny phenomenon, a butterfly-laden Gucci Marmont, has our vote. We’ve all found ourselves in this all-too-familiar scenario: you’ve scored the perfect party pants but don’t have a top to match. Taking the stress out of styling are co-ords—yes, matching is now on the mandate. The coolest take on conscious coupling comes courtesy the Kar Jenners—Kim matched her ride with a highlighter hued two-piece and Kylie Jenner’s #mirrorfie featured a red-hot latex set. For those still loco for logos, Olivia Culpo’s Fendi find is the way to go. So, here’s what’s been flashing on our feeds: Priyanka Chopra’s form-flattering gown as she arrived at Ralph Lauren’s 50th anniversary celebrations, Kendall Jenner alongside Bella Hadid in a one-shoulder Alexandre Vauthier dress and blogger Chiara Ferragni’s custom made Prada for her rehearsal dinner. What did these looks have in common? They all came covered in crystals of the splashiest kind. Our advice is to not stop at a mere smattering or trimming but go all out—there isn’t a trend more optimistic and uplifting to ring in the new year.

Scroll ahead for our edit of the best party outfits and accessories you need to add to your closet before NYE.

END_OF_DOCUMENT_TOKEN_TO_BE_REPLACED

Given that our favourite celeb crew loves to party, it should come as little surprise that the past week has played host to a series of grand Diwali shindigs, from Shah Rukh Khan’s big blowout at Mannat to Abu Jani and Sandeep Khosla’s house party. And after all the party-hopping, it was time to go back to family, as A-listers took to Instagram to allow fans a peek into their homes on the auspicious eve of Diwali.

Mindful of the new regulations on the use of firecrackers, Bollywood’s best instead chose to spread the light and warmth in different ways. Alia Bhatt collaborated with a team of volunteers to feed over 500 dogs across seven cities, before winding up the night with Karan Johar and his fresh batch of ‘students’: Ananya Panday and Tara Sutaria, from the cast of Student of the Year 2. The proud daddy, himself, was spotted twinning with his toddler in coordinated Manish Malhotra kurtas. Elsewhere, celebrity It-couple Virat Kohli and Anushka Sharma made for an elegant portrait in their traditional garb against the backdrop of their brightly-lit home in Mumbai.

The glamorous Bachchan clan chose to keep their celebrations family-only, and stepped outside after the Lakshmi puja to introduce young Aaradhya to the joy of sparklers. The proud mamas of the Kapoor clan, Kareena and Karisma, dolled up with their kids, with Taimur sporting a regal black kurta for the occasion. Bride-to-be Priyanka Chopra also spent some time off with her family in Mumbai before her nuptials, while Lisa Haydon ushered in some festive cheer against the glittering Hong Kong skyline. Second time parents, Mira and Shahid Kapoor snuggled up to make for a cosy picture on Instagram, and she was later spotted bonding with her brother-in-law and Bollywood debutante, Ishaan Khatter.

Scroll onwards to see how your favourite celebrities lit up the night with their families during Diwali 2018.

Diwali means so much to us all… New beginnings, love, family, laughter, prosperity, happiness, partying, and also peace!!! May all this and more light up our lives 🌞 And most importantly let’s make it a happy and safe Diwali not just for us but for the animals too… they are also god’s creatures ❤❤❤❤❤🤗😘 #HappyDiwali

Yesterday the amazing @Motopaws volunteers joined us in saying yes to the pooch and no to the pataka. Together we were able to feed over 500 street dogs across 7 cities! This Diwali, let’s think about the animals and celebrate responsibly. Choose #PoochOverPataka

Happy Diwali from us to you ….. wish u love,happiness n prosperity 🙏🙏♥♥#diwali2018#festiwaloflights

A very Happy Diwali, spread the light, be the light! 🙏🏼✨🌝💖 with lots of love, cheer and happiness, Team #MotichoorChaknachoor #woodpeckermovies@viacom18motionpictures@nawazuddin._siddiqui@debamitra_hasan @iammeghvrat

Happy Diwali! Love and light all ❤✨

This Diwali, light a diya for love and peace ✨♥ #शुभदीपावाली

Nice to you today 🤪

Twinning with the namesake @aliaabhatt 💥👯‍♀️

Red Hot! Twinning in red with the one and only @karanjohar !! ♥️♥️ #aboutlastnight

may the Festival of Lights ignite us all! ✨✨ Happy Diwali! 👗 @simratmarwahatelier

♥and✨from my home to your’s… 📸 courtesy my mommy @avinashsethi.10 (rare breed of a photographer who smiles more than the subject) #BestDiwali #Blessed

A Diwali Kiss for all you lovelies ❤😘 Happy Diwali!!!! Muahhhhhhhhh

Putting on smiley faces ! No pouts this time 😂 @junochopra reveals all 😁

Happy Diwali. So good to be home to celebrate with my loved ones. I wish for the world to be bestowed with love, light and happiness. 💥✨

When two is company and three would be one too many:) #happygirls #accidentallytwinning#diwalidoubledhamaka

Happy Diwali! May your world be filled with love and laughter #diwali2018

Happy Diwali from our home ✨ May you all find the light in you this Diwali …. 🕉✨🙏

Noida, October 21st, 2018 – Presented by DLF Shopping Malls, the grand finale show of the ‘Fashion Month’ was hosted by DLF Mall of India on Saturday night and showcased a roundup of the top autumn-winter trends of the season. The evening was filled with glamour and glitter and was a treat for the audience. Bollywood actor, Adah Sharma sizzled on the ramp in anensemble by Mango and brought down the curtains of the month long fashion gala.

END_OF_DOCUMENT_TOKEN_TO_BE_REPLACED

New Delhi, Oct 5, 2018: The Fashion Design Council of India (FDCI) announced the show schedule and list of designers for the Lotus Make-Up India Fashion Week (LMIFW) in association with NEXA Spring Summer 2019. The event will be held from October 10 to 13, at the Jawaharlal Nehru Stadium, Lodhi Road, New Delhi.

Almost 120 designers will participate and be part of a larger canvas that will celebrate various aspects of fashion – from inclusivity to handlooms and create a new bond with nations like Australia and the embassy of Japan through the medium of fashion.